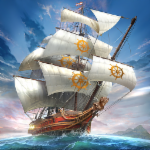 We would like to inform Admirals as below of the 1/18(Wed) maintenance patch note.

Please refer below for the details.

* [Combat] Aydin Leis can be recruited after finishing Chronicle. 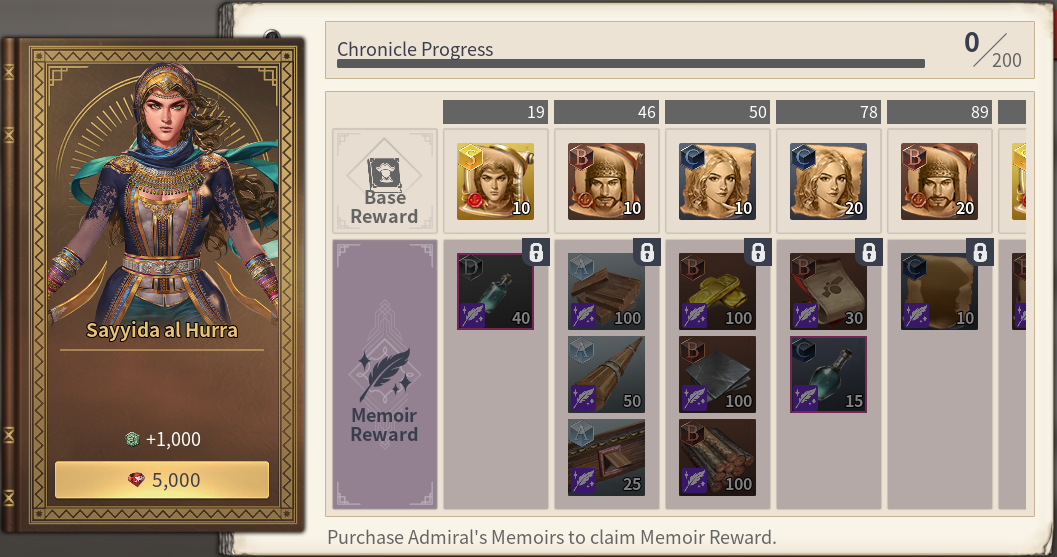 [Mate] 8 new pirate mates will be added, and a pick-up event will start along. 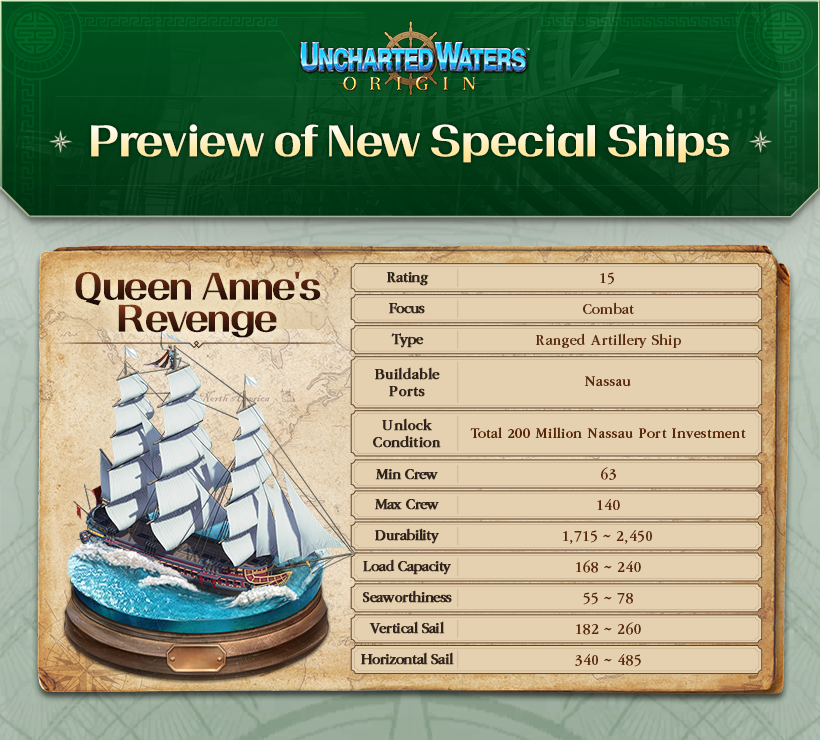 [Server] A new peace server "창해(Vast Sea)" will be added.

- It is a server where the bureau investment by red gem and PK are unavailable.

[Server] Australia server "Pacific" will be transferred to "Coral Sea" in Korea.

- Server time of "Coral Sea" server will be maintained the same as before.

- If company LV is above LV 15, a tutorial of consecutive combat will pop up when moving out to the sea.

- A function will be added, which uses the salvage tool automatically and revives during consecutive combat if there is a proper salvage tool for the fleet's ship.

[Combat] Changed to select claim if it exceeds load ratio, when obtaining supply as a reward (1/18 19:25 added)

[Challenge] The Fort Ship's Finale Challenge will be added.

- It is available after finishing the Salvador Leis chronicle.

[Consecutive Combat] Improved to check the reward obtained on the combat result screen's UI, when logging in after closing the application

[Assault] If failed the assault after damaging more than 1% damage, it will be applied retroactively as 50% of total damage in the next phase.

- Chance of mutiny disaster increases depending on the number of mates slacking.

[Trade] A major trend system will be added. 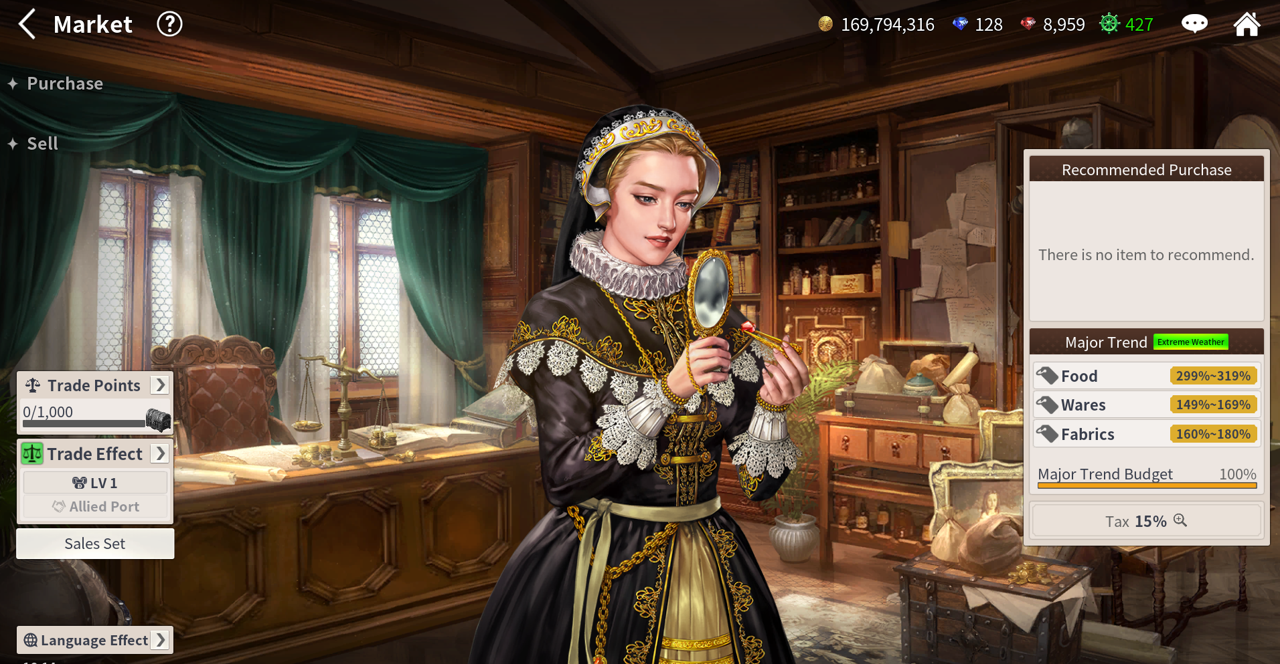 ■ What is a Major Trend?

A major trend is a trade content that the admirals encompassing LV may enjoy it by making profits out of selling the trade goods to the city where a major trend occurred with a certain cycle.

If a major trend occurs, there would be another chance for the admirals with earlier LV to earn profits due to the invigoration of cheaper trade goods. Also, we are expecting that trade playing patterns to be more diversified according to the type of major trends.

There are 8 types of major trends in total, and each of them has a different cycle to occur. 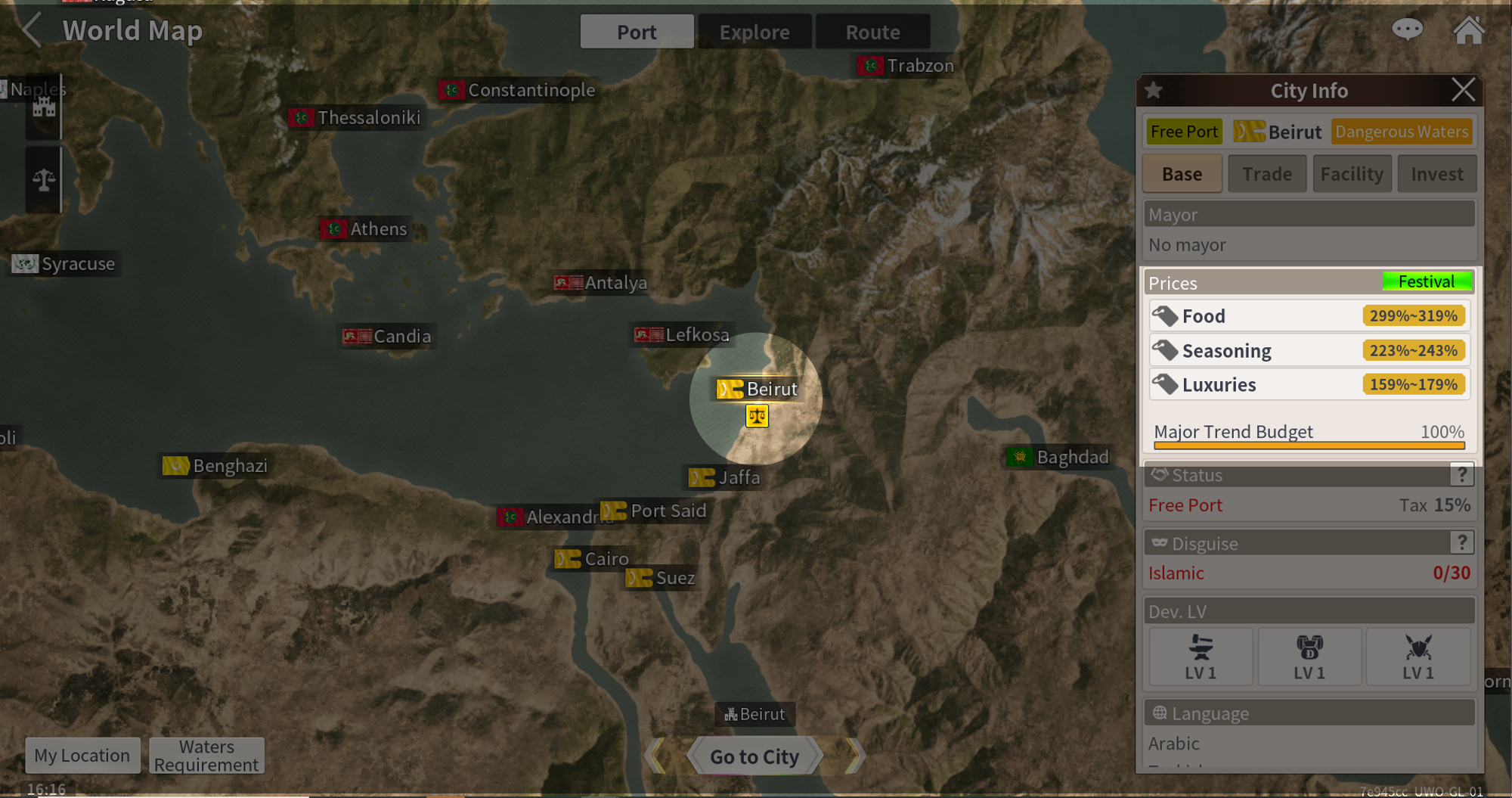 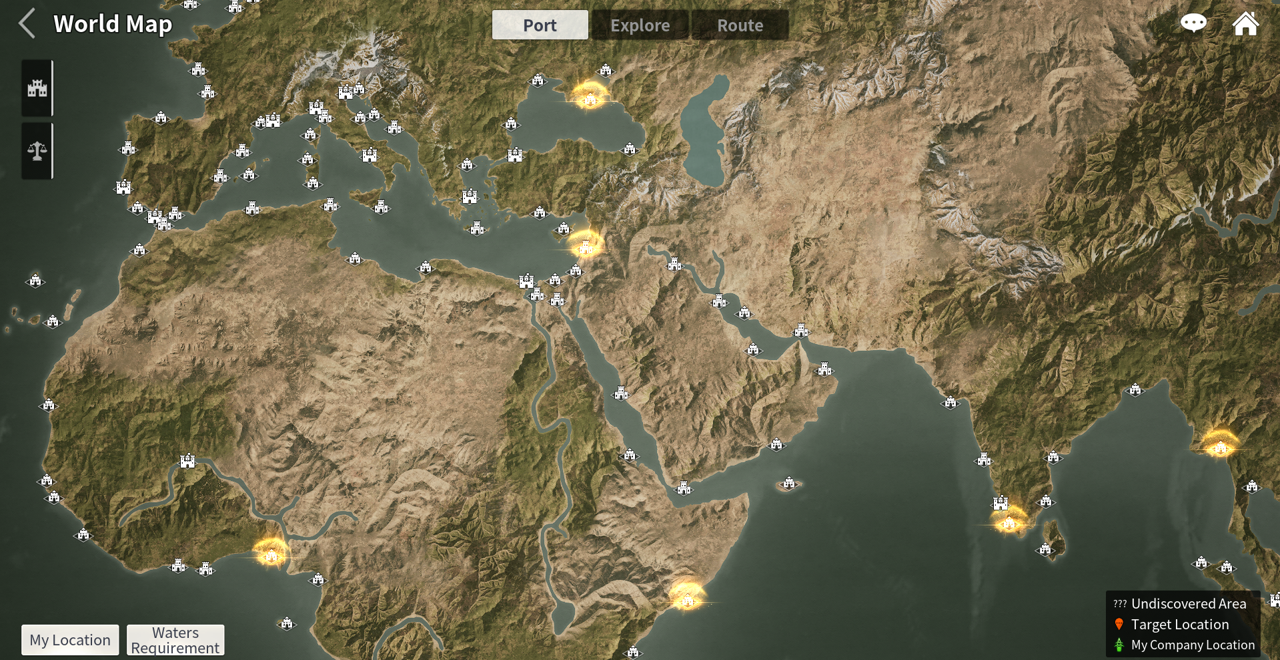 A budget is a certain amount of number in a major trend.

You can use it until the budget becomes 0% or an hour after the major trend occurred. 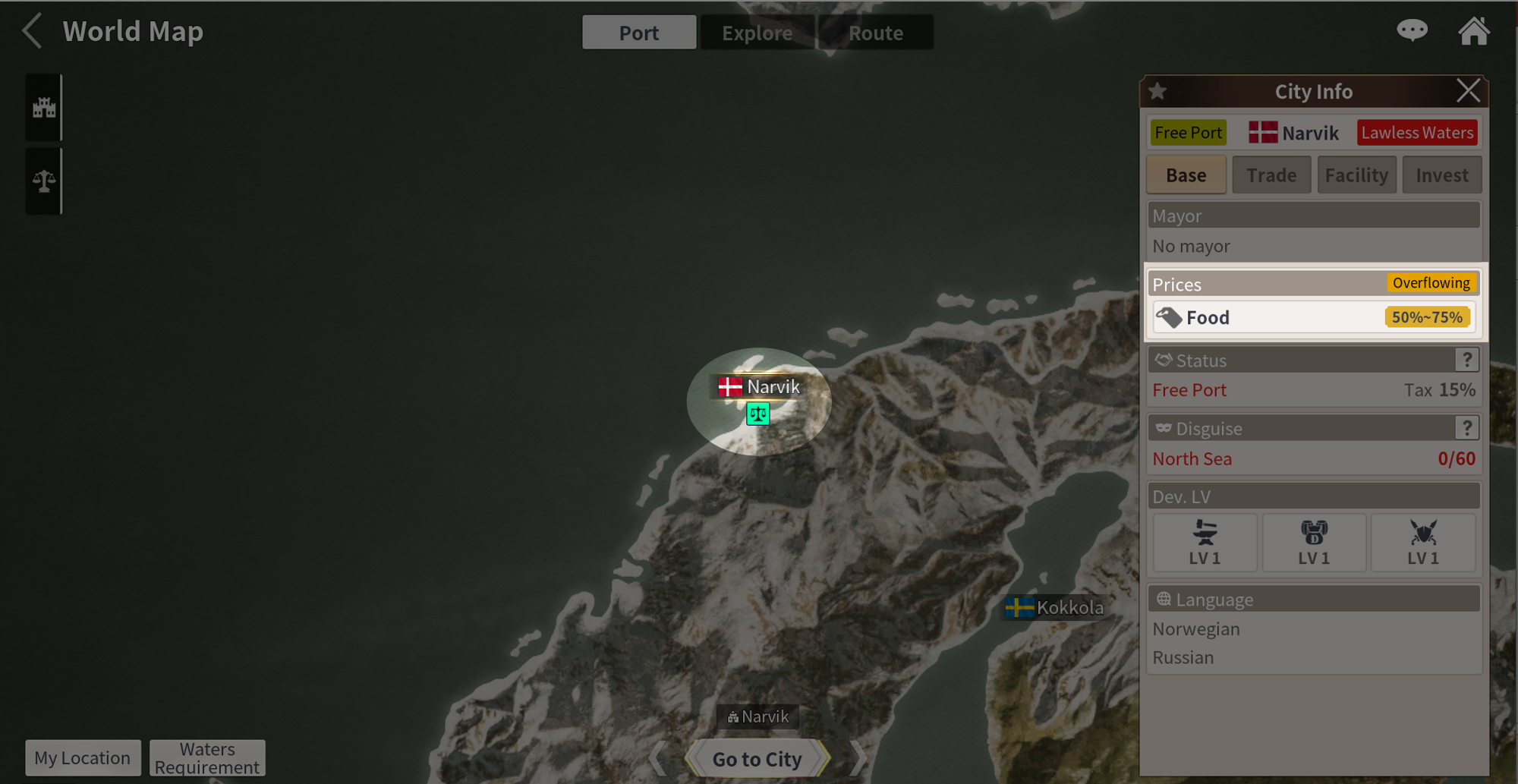 When selling trade goods in the city where a major trend occurred, its budget will decrease as much as profit. A major trend budget is affected by some factors such as the city that occurred, the type of major trend, and the number of logged-in users in each server. All admirals in the server will share this budget.

A rare major trend will be granted a higher budget. Also, as a server with larger populations will have more budget, it will let admirals enjoy the major trend regardless of the server.

Besides, there are a lot of hidden factors affecting the budget.

Even if there is no available budget to use or an admiral missed the major trend, the price will be formed within 100%~125% scale of the sales price after the major trend ends, to guarantee the minimum sale price. If you missed it, please don't be disappointed, as you can join a similar event that followed may occur in an adjacent trade area.

If a major trend occurs, the trade goods that have lower trade profit on average will be granted more tremendous weighted value in price.

You can check out the detailed information about the market price in the game.

In the case of specialty, a higher price will be applied when comparing it with the price of normal trade goods.

▶ If a major trend ends, the market price increased will be changed arbitrarily between the range of 100% and 125%.

Please keep your eyes on this major trend event, as you can gain a maximum of 90k ducats as profit per trade good depending on the type of major trend and the location where it occurred.

The market price for the following types of trade goods will change, depending on what major trend occurs.

■ About Fluctuations in Figures

As a major trend has a large scale of trade profits to be handled and budget and market price are volatile, an unexpected trade profit issue may occur.

[Shipyard] Added a description of the probability about ship dismantlement reward

- Each shipbuilding material may be purchasable depending on investment, development LV, and title.

[Investment] Added a function to abandon a mayor and to return Special Investment Deed, when immigrating

- A mayor was not able to immigrate before, but now it will be improved to abandon it and immigrate.

- If abandoning a mayor, investment points of capital, territory, and each city that is a mayor will be retrieved and returned as an investment deed.

- 30% of the remaining investment points will be returned as an investment deed and given.

[Gear] Added a setting to hide a head, face decoration, and cape

- New achievements will be counted after January 18th update.

[Tool] EXP potion will be added.

- It is a consumable item to earn the mate's EXP, and you can get it as a reward when finishing a daily task.

[Tool] Salvage tool will be on sale in all the cities, as investment condition follows.

[UI] Added a notification of slacking status in Mates

[UI] Added an explanation of national power in Nation

[UI] Changed the national flag of the Ming

[FX] A new ship decoration will be added.

[AOS] Allowed access from AOS devices with lower specs, compared to the previous

[Combat] Changed Melee to use the HP of the crews

[Combat] Readjusted the recovery of tool/medicine and damage, according to the introduction of Melee HP

[Combat] Changed the terrain in the combat against the treasure company

[Duel] Changed the minimum damage from 1 to 28

[Skirmish] Changed to save placement setting only in the city, not to apply the sailing effects in skirmish

- Placed much stronger enemy, and powerful opponent (every 6 hours), and increased rewards

- Ice Breaking 100 (Current) > Adjusted to 60: Seawortiness 110 areas such as the Sea of Okhotsk, Narvik-Reykjavík

- Upgrade of the exploration reward result is rescheduled to the February update, as it requires additional improvements.

[Adventure] Special effects in normal exploration will be removed.

- Special effects will be applied only to a special exploration which is expected to be updated in 2Q.

[Trade] Increased prices of food, seasoning, livestock, medicine, sundries trade goods, and decreased quantity due to the increase in prices

[Ship] Changed the balance of the salvage tool's repair requirement

[Ship] Changed the combat recovery of Area Support Ship from 20% to 30%, compared to the default recovery

[Auction House] Minimum cost for registering ships will be added.

[Order] Improved the effect of Indomitable

[Assault] Issue where the error occurs intermittently when operating the menu

[Sailing] Issue where it does not sail offline to a destination during auto moving for request, if starting to follow NPC and close the game

- Bypassing route from Ambon to Banda

- Colliding terrain in route from Gdańsk Saint to Petersburg

- Colliding terrain in route from Chang'an to Manila

[Sailing] Issue where the error occurs intermittently during auto sailing

[Prologue] Issue where the error occurs intermittently when starting it

[Request] Changed Fighting Pirates and Perfect Victory requests not to appear, if not satisfying the sailing conditions of the nearby city where you want to accept a request

[Bureau] Issue where the fame is not applied to achievement and request condition if it is maximum, when giving fame as the investment reward

[Trade] Issue where Aceh, Pasay, and Palembang are set as West India or Indochina trade areas, not as South Asia

[Harbor] Issue where it shows as O, not as △ when the load capacity of material and ammo is 0

[Order] Issue where the wrong message shows up when using Survivalist

[UI] Issue where a social motion is not added to favorites

[Other] Changed the name of Celery to Celery Seed