The link has been copied.
Guide

The shipyard is where all ship-related tasks can be performed.

Either build, modify ships, purchase parts or perform upgrades from the shipyard.

There are other features such as restoring the life into ships that have exhausted its lifespan, or dismantling unwanted ships. 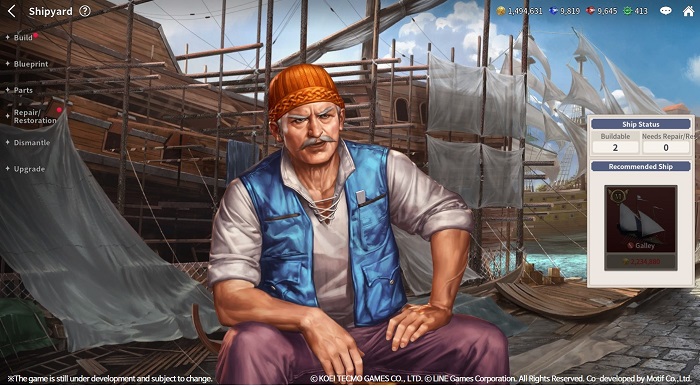 Ships that have been unlocked by acquiring blueprints can be built.

All of the available ships and ship orders can be viewed from this menu.

The remaining time of a ship being built, and the location of their completion can also be viewed. 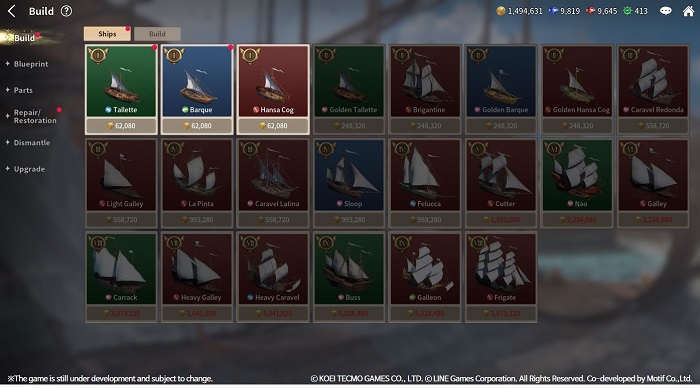 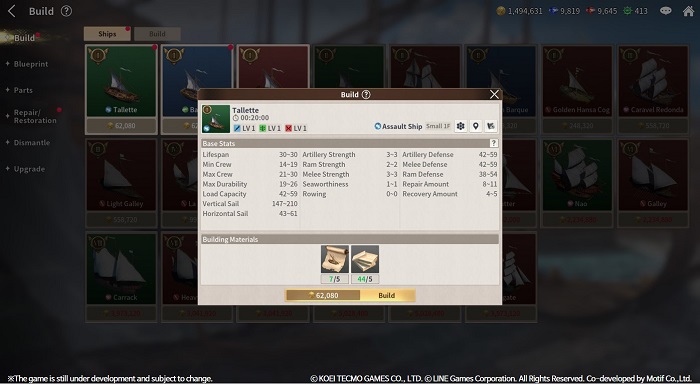 Unlock the blueprint for different ships and modify cabins to increase its load, maximum crew or combat power.

Each blueprint has their own Build LV, and a set amount of Build LV EXP is earned whenever a ship is built. 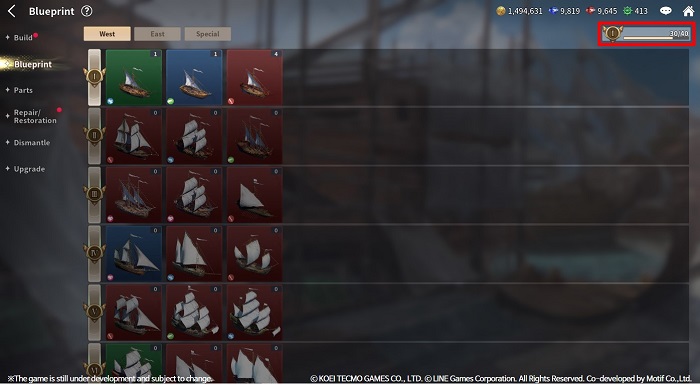 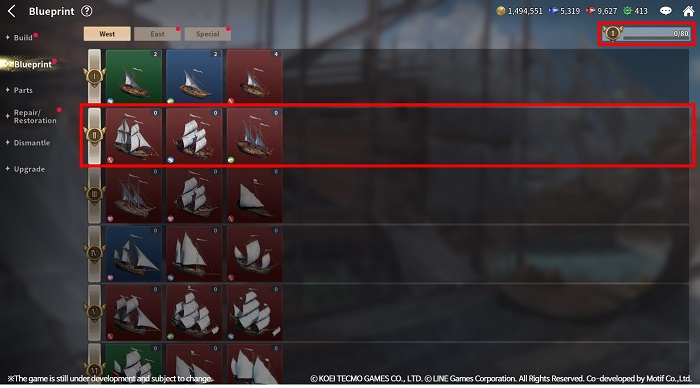 Cabins can be switched out to perform completely different functions.

The type of cabins that can be included with modifications vary based on the ship type and the default cabins.

When modifying the cabins of a ship, all other ships of the same type will have the changes applied as well. 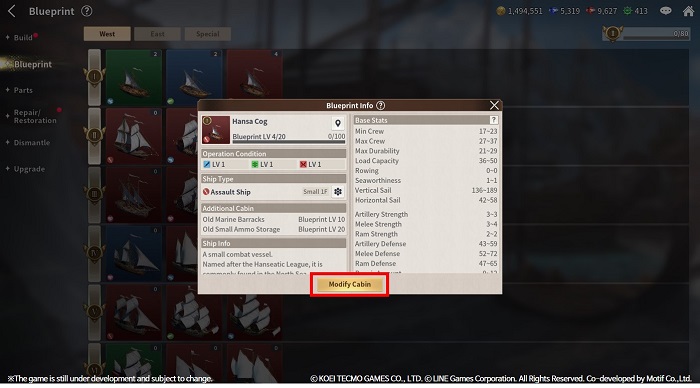 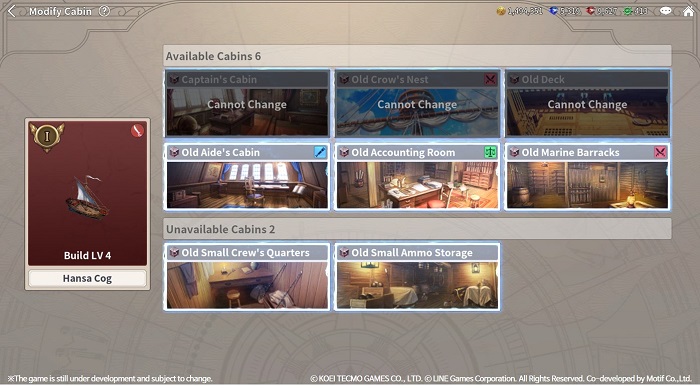 Purchase or sell parts that can be equipped on ships. 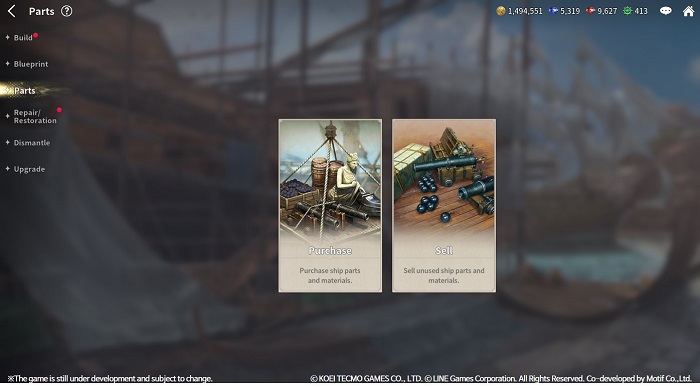 View all of the parts owned and available for purchase.

Certain parts only become available when the port’s development LV is high. 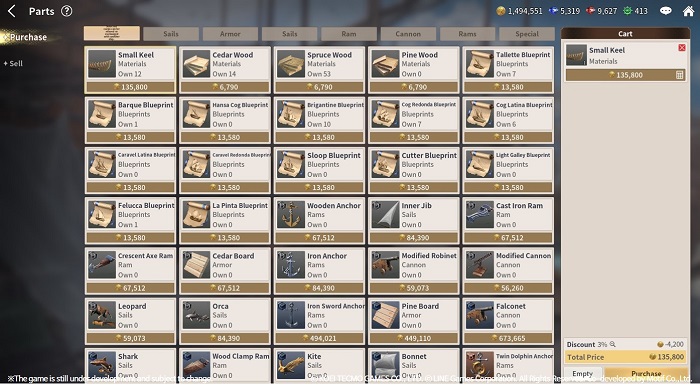 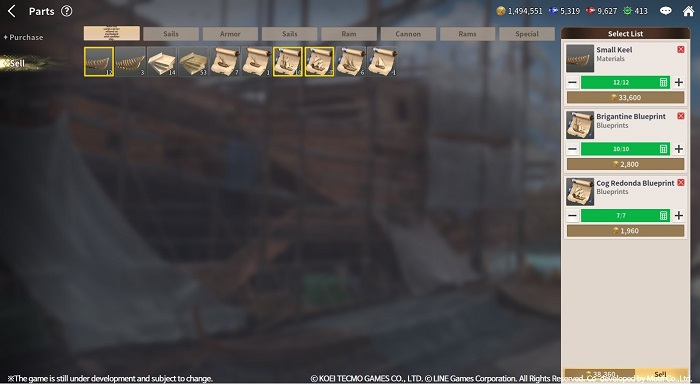 Spend Ducat to repair ships that have had their durability damaged.

Durability of ships can be reduced while sailing due to battles or disasters.

If a ship’s durability falls to 0, it immediately becomes unable to sail.

If any of the ships in your fleet have insufficient durability,

you will not be able to set sail until the ship is replaced or repaired. 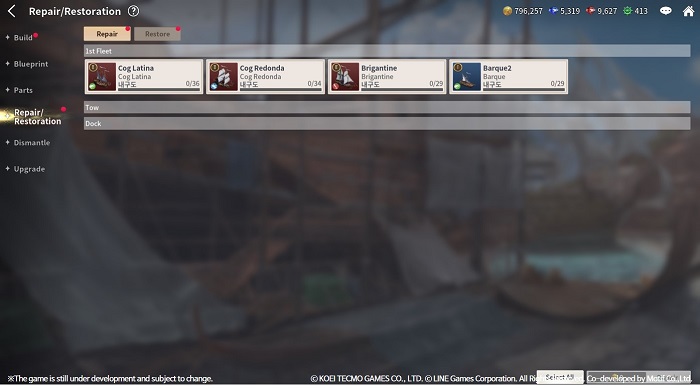 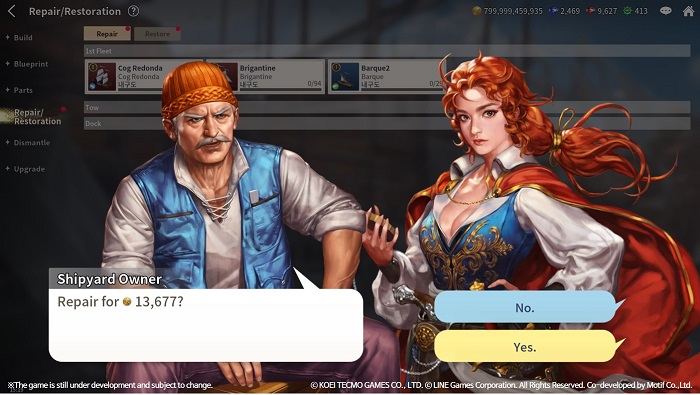 Ships that have had their lifespan decreased can be restored by using the ship’s blueprint.

The lifespan of a ship continuously decreases while playing the game. If lifespan falls to 0, 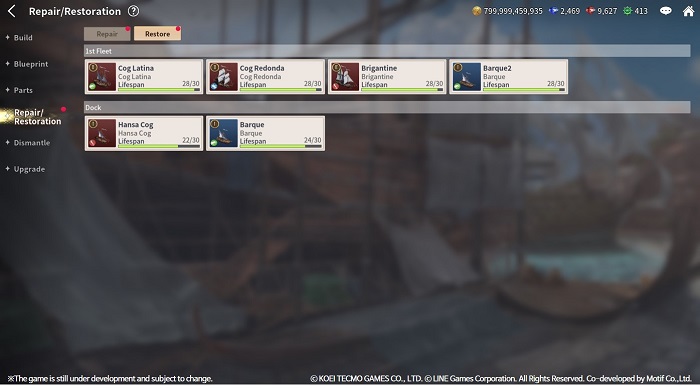 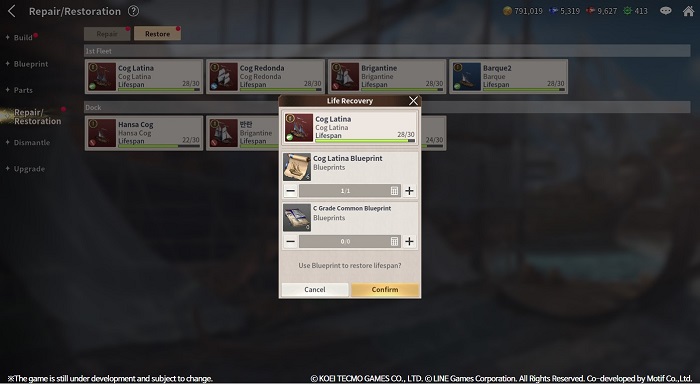 Any unwanted ships can be dismantled for spare materials to build ships. 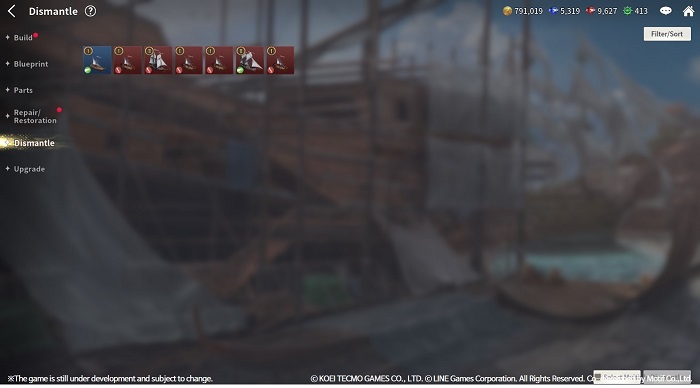 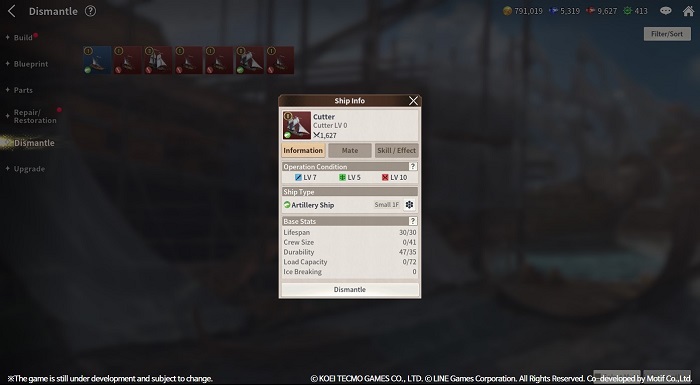 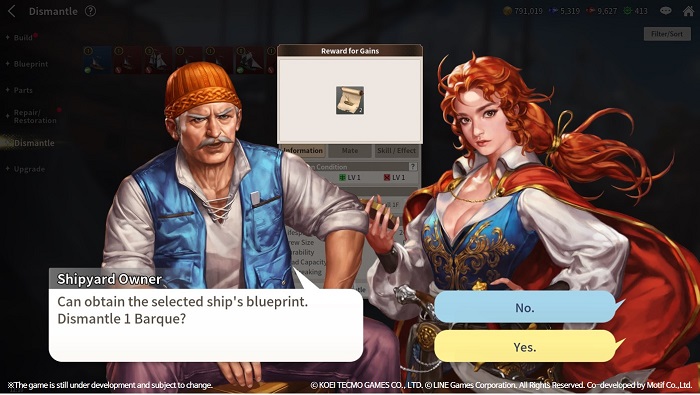 The basic stats of a ship can be upgraded.

and costs the target ship’s blueprint and Blue Gems to proceed.

Ship upgrades can only be performed up to 5 times.

Once all attempts are used, the ship can no longer be upgraded. 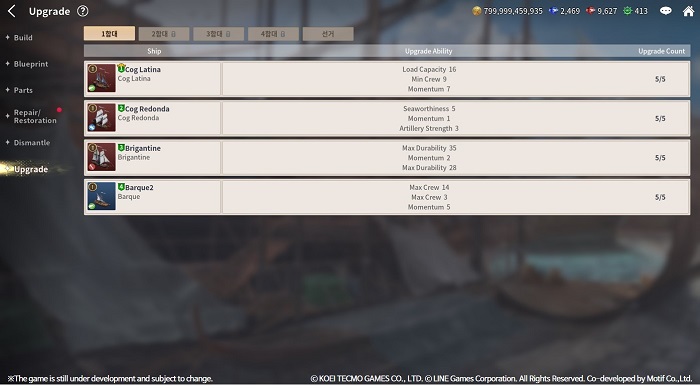 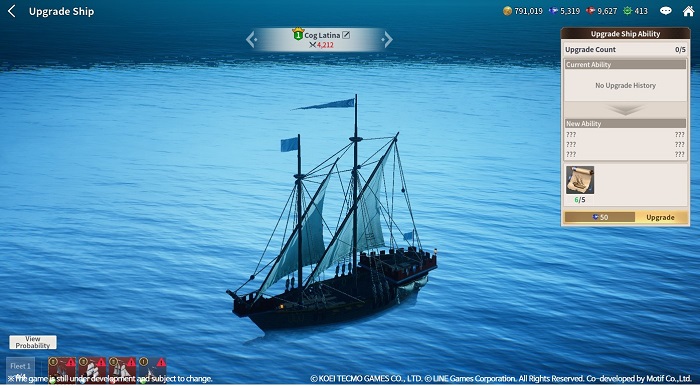 Upon completing the first upgrade, the improved stats will be displayed at the bottom.

When performing upgrades after the first attempt,

you will have to make a selection between the existing and the new stats to replace the upgrade. 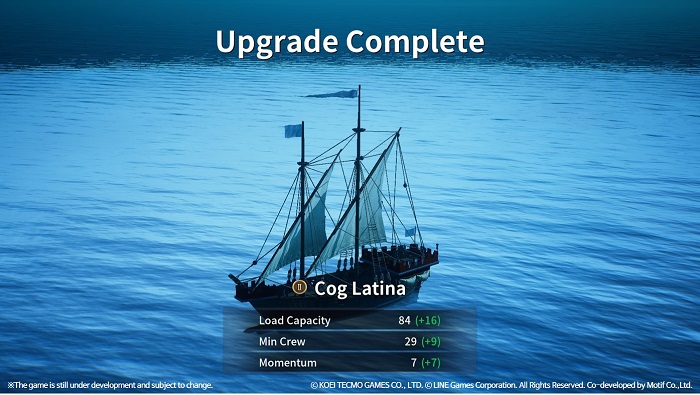 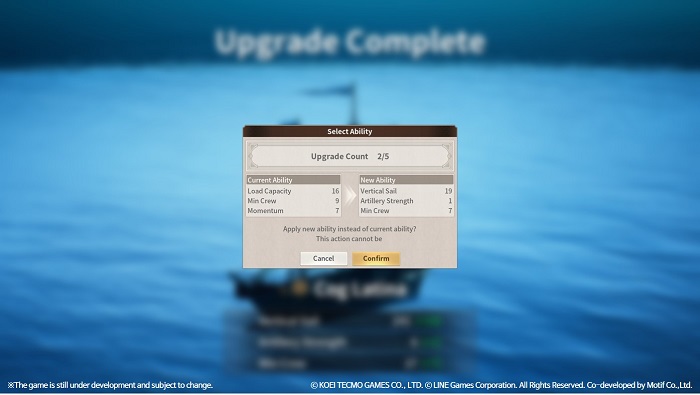 When a Great Success occurs, all of the improved stats will be fixed at their maximum values.